Cyber Hunter Game is a game that leads to the concept of robots but this is high tech building lots of grass, wall, vehicles, the quite interesting tower, not just wall make it home to Aja this is the difference between Cyber Hunter and Fortnite. This game is also very different from Free Fire from the gameplay we still need sniper because the terrain of this game is quite widespread when entering the battlefield. So, let's discuss further 4 weapons of the hurt sniper rifle in the Cyber Hunter game: 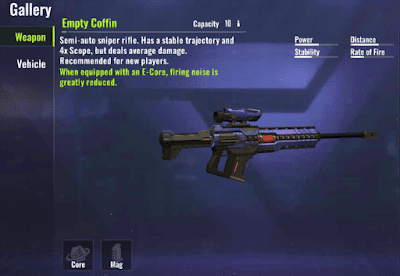 Sniper guns like Dragunov if in other games, the model sniper Brust instead of one shoot is suitable to defeat the nimble enemy, but for this weapon damage is still lacking. 10 bullet capacity and no additional scope, because it has been build-scope 4X good for beginners when trying to a sniper in this game. 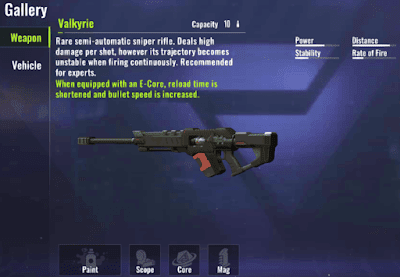 A rare weapon of the semi-automatic sniper rifle, get into the 3rd list can use scope up to 8X, type shot one shoot attachment, Core, magazine, scope, and the number of bullet 10. For damage Valkyrie still, be on top of Empty Coffin with a scope of X8 enough to give sore damage from afar. 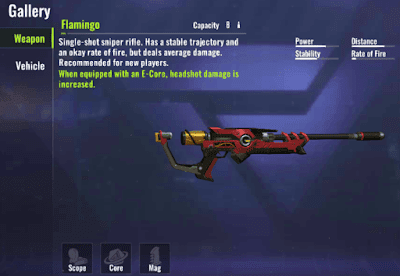 The sick weapon in this second sequence has damage exceeding Valkyrie si rare weapons, for attachment can be added scope, magazine, e-core max number of bullets 8. E-Core Flamingo serves to add higher headshot chances well this is suitable for advanced player Cyber Hunter with X8 scope already more than a pain hit Flamingo from the top of the hill. 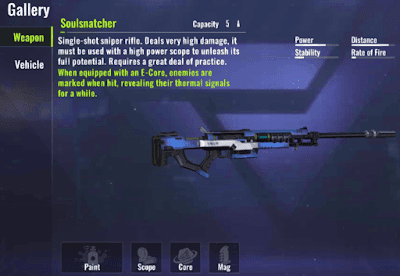 The number one sick weapon in Cyber Hunter, actually for Soulsnatcher's damage is similar to that of a Flamingo, eleven to twelve but for a soul, he has far enough distance compared to the 3 weapons above. Scope, E-Core, magazine and the number of bullets 5 max. The e-Core function is similar to tracking when the enemy hit by this weapon. The less the number of bullets then surely he is strong damage suitable for the pro player one hit type of shot.

That's 4 pieces of the sniper rifle in the cyber-hunter game if we compare from the Hurt Soul is ranked first and Coffin is ranked at the bottom. Only the Soul for stability is still lacking if I am still good to use coffin because it is not hard to shoot a nimble enemy.