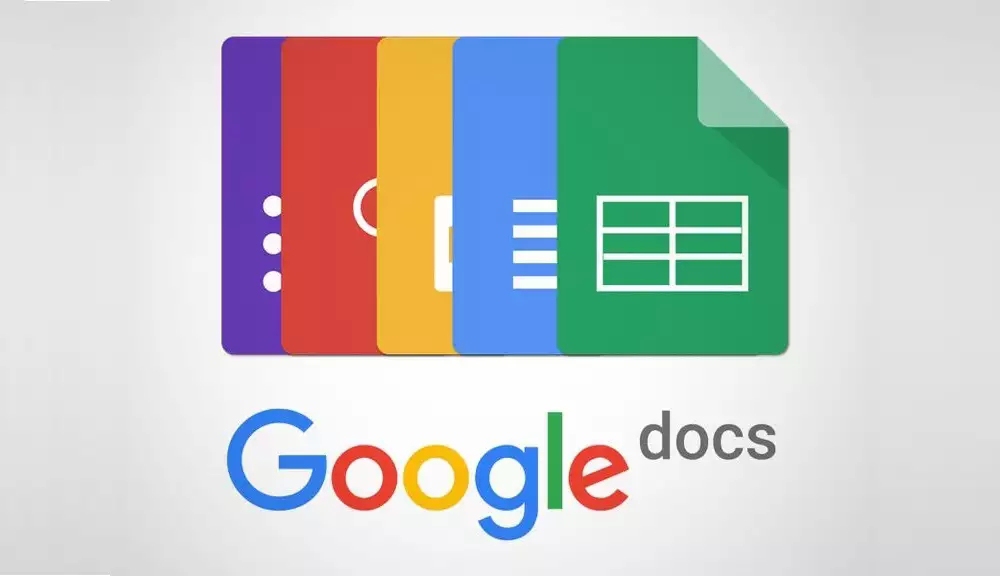 Google Docs is a word processor included as part of a free, web-based software office suite offered by Google within its Google Drive service. This service also includes Google Sheets and Google Slides, a spreadsheet and presentation program respectively.

Google Docs is available as a web application, mobile app for Android, iOS, Windows, BlackBerry, and as a desktop application on Google's ChromeOS.

The app is compatible with Microsoft Office file formats. The application allows users to create and edit files online while collaborating with other users in real-time.

Edits are tracked by user with a revision history presenting changes. An editor's position is highlighted with an editor-specific color and cursor.

A permissions system regulates what users can do. Updates have introduced features using machine learning, including "Explore", offering search results based on the contents of a document, and "Action items", allowing users to assign tasks to other users.

Google Docs originated from two separate products: Writely and XL2Web. Writely was a web-based word processor created by the software company Upstartle and launched in August 2005.

It began as an experiment by programmers Sam Schillace, Steve Newman and Claudia Carpenter, trying out the then-new Ajax technology and the "content editable" function in browsers. On March 9, 2006, Google announced that it had acquired Upstartle.

DocVerse allowed multiple user online collaboration on Microsoft Word documents, as well as other Microsoft Office formats, such as Excel and PowerPoint.

Improvements based on DocVerse were announced and deployed in April 2010.[9] In June 2012, Google acquired Quickoffice, a freeware proprietary productivity suite for mobile devices. In October 2012, Google renamed the Drive products and Google Documents became Google Docs.

Users can access all Docs, as well as other files, collectively through the Google Drive website. In June 2014, Google rolled out a dedicated website homepage for Docs, that contains only files created with the service.

In 2014, Google launched a dedicated mobile app for Docs on the Android and iOS mobile operating systems.

Google Docs and the other apps in the Google Drive suite serve as a collaborative tool for cooperative editing of documents in real-time.

Documents can be shared, opened, and edited by multiple users simultaneously and users are able to see character-by-character changes as other collaborators make edits.

Changes are automatically saved to Google's servers, and a revision history is automatically kept so past edits may be viewed and reverted to.

An editor's current position is represented with an editor-specific color/cursor, so if another editor happens to be viewing that part of the document they can see edits as they occur.

A sidebar chat functionality allows collaborators to discuss edits. The revision history allows users to see the additions made to a document, with each author distinguished by color.

Only adjacent revisions can be compared, and users cannot control how frequently revisions are saved. Files can be exported to a user's local computer in a variety of formats (ODF, HTML, PDF, RTF, Text, Office Open XML). Files can be tagged and archived for organizational purposes.

In order to view and edit documents offline on a computer, users need to be using the Google Chrome web browser. A Chrome extension, Google Docs Offline, allows users to enable offline support for Docs files on the Google Drive website.

In June 2014, Google introduced "Suggested edits" in Google Docs; as part of the "commenting access" permission, participants can come up with suggestions for edits that the author can accept or reject, in contrast to full editing ability.

In October 2016, Google announced "Action items" for Docs. If a user writes phrases such as "Ryan to follow up on the keynote script", the service will intelligently assign that action to "Ryan".

Google states this will make it easier for other collaborators to see which person is responsible for what task. When a user visits Google Drive, Docs, Sheets or Slides, any files with tasks assigned to them will be highlighted with a badge.

Users can also mark specific document text, press Explore and see search results based on the marked text only.

The citation feature also marked the launch of the Explore functionalities in G Suite for Education accounts.

Files in the following formats can be viewed and converted to the Docs format:
For documents: .doc (if newer than Microsoft Office 95), .docx, .docm .dot, .dotx, .dotm, .html, plain text (.txt), .rtf, .odt

Limits to insertable file sizes, overall document length and size are listed below:

Google Docs and the Drive suite are free of charge for use by individuals, but are also available as part of Google's business-centered G Suite, enabling additional business-focused functionality on payment of a monthly subscription.

A simple find and replace tool is available. The Drive suite includes a web clipboard tool that allows users to copy and paste content between Google Docs, Google Sheets, Google Slides and Drawings.

The web clipboard can also be used for copying and pasting content between different computers. Copied items are stored on Google's servers for up to 30 days.

Google offers an extension for the Google Chrome web browser called Office editing for Docs, Sheets and Slides that enables users to view and edit Microsoft Word documents on Google Chrome, via the Docs app.

Google Cloud Connect was discontinued in April 2013 as, according to Google, Google Drive achieves all of the above tasks, "with better results".[43]

In a December 2016 review of Google Docs and the Drive software suite, Edward Mendelsohn of PC Magazine wrote that the suite was "visually elegant" with "effortless collaboration", but that Docs, as paired with Sheets and Slides, was "less powerful than desktop-based suites".

Comparing Google's office suite with Microsoft's and Apple's, he stated that "Docs exists only in your Web browser", meaning that users have "more limited feature set" than "the spacious, high-powered setting of a desktop app".

He wrote that offline support required a plug-in, describing it as "less convenient than a desktop app, and you have to remember to install it before you need it".

Mendelsohn praised the user interface, describing it as "elegant, highly usable" with "fast performance", and that the revision history "alerts you to recent changes, and stores fine-grained records of revisions".

Regarding the Explore functionality, he credited it for being the "niftiest new feature" in the suite and that it surpassed comparable features in Microsoft Office. He described the quality of imports of Word files as "impressive fidelity".

He summarized by praised Docs and the Drive suite for having "the best balance of speed and power, and the best collaboration features, too", while noting that "it lacks a few features offered by Microsoft Office 365, but it was also faster to load and save in our testing".

In May 2017, a phishing attack impersonating a Google Docs sharing email spread on the Internet.

The attack sent emails pretending to be someone the target knew, requesting to share a document with them.

Once the link in the email was pressed, users were directed to a real Google account permissions page where the phishing software, a third-party app named "Google Docs", requested access to the user's Google account.

Once granted, the software received access to the user's Gmail messages and address book, and sent new fraudulent document invitations to their contacts.

The phishing attack was described by media outlets as "massive"and "widespread", and The Next Web's Napier Lopez wrote that it's "very easy to fall for".

One of the reasons the attack was so effective was that its email messages passed through spam and security software, and used a real Google address. Within hours, the attack was stopped and fixed by Google, with a spokesperson stating that "We have taken action to protect users against an email impersonating Google Docs, and have disabled offending accounts.

We've removed the fake pages, pushed updates through Safe Browsing, and our abuse team is working to prevent this kind of spoofing from happening again". On the same day, Google updated Gmail on Android to feature protection from phishing attacks.

Media outlets noticed that, while the added protection was announced on the same day as the attack, it "may not have prevented this week's attack, however, as that attack involved a malicious and fake "Google Docs" app that was hosted on Google's own domain".

In early May 2017, Ars Technica reported that "at least three security researchers" had raised issues about the threat, one of them in October 2011, and that the attacker or attackers behind the actual incident "may have copied the technique from a proof of concept posted by one security researcher to GitHub in February".

Furthermore, the report noted that Google had been repeatedly warned by researchers about the potential threat, with security researcher Greg Carson telling Ars Technica that "I don't think Google fully understood how severely this could be abused, but certainly hackers did".

In October 2017, Google released a server-side update to its codebase, which started incorrectly flagging random documents as unspecified violations of its "Terms of Service" policies.

A fix was released shortly afterwards, though the issue became noteworthy for the extent of Google's control over users' content, including its analysis of the contents of documents, as well as for its ability to shut users out at any time, including during critical moments of work

Create amazing documents, With Google Docs, you can write, edit, and collaborate wherever you are. For Free.

Docs you love with added security and control for teams.

More than letters and words

Google Docs brings your documents to life with smart editing and styling tools to help you easily format text and paragraphs. Choose from hundreds of fonts, add links, images, and drawings. All for free.

Choose from a wide variety of resumes, reports, and other pre-made documents , all designed to make your work that much better, and your life that much easier.

Get to your documents anywhere, anytime

Access, create, and edit your documents wherever you go — from your phone, tablet, or computer — even when there's no connection.

Do more, togetherWith Google Docs, everyone can work together in the same document at the same time.

Share with anyoneClick share and let anyone – friends, classmates, coworkers, family – view, make suggestions that you can accept or reject, or edit your document directly.

Edit in real-timeWhen someone is editing your document, you can see their cursor as they make changes or highlight text.

Chat & commentChat with others directly inside any document or add a comment with “+” their email address and they’ll get a notification.

All your changes are automatically saved as you type. You can even use revision history to see old versions of the same document, sorted by date and who made the change.

Open, and edit, and save Microsoft Word files with the Chrome extension or app.

All of Search, right in Docs.

Explore and get inspired by images, quotes, and text from Google searches, without leaving the Android app.

Do more with add-ons

Take your Docs experience even further with add-ons. Try Lucidchart Diagrams to create and insert flow charts and diagrams.

Docs is ready to go when you are. Simply create a document through your browser or download the app for your mobile device.