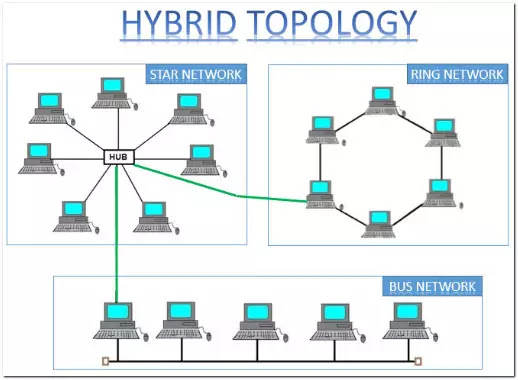 The following are some of the hybrid network topologies:

Figure 1 is a diagrammatic representation of the star-wired ring topology:

In Figure 1, individual nodes of a given star topology like Star Topology 1are interconnected by a central switch which in turn provide an external connection to other star topologies through a node Ain the main ring topology.

Figure 2 is a diagrammatic representation of the star-wired bus topology:

In this setup, the main bus topology provides a backbone connection that interconnects the individual star topologies. The backbone in this case is a wired connection.

Connection of the lower levels like level 2 to higher levels like level 1 is done through wired connection. The top most level, level 0, contains the parent (root) node. The second level, level 1 contains the child nodes which in turn have child nodes in level 3. All the nodes in a given level have a higher parent node except for the nodes at the top most level.

The nodes at the bottom most level are called leaf nodes, since they are peripheral and are parent to no other node. At the basic level, a tree network topology is a collection of star network topologies arranged in different levels. Each level, including the top most, can contain one or more nodes.

1. Where There Is Need for Flexibility and Ease of Network Growth
Network growth is when more network nodes are added to an existing network. A hybrid network eases addition of new nodes to the network as changes can be done at the basic network levels as well as on the main network.

2. Where There Is Need for Isolation of Individual Networks
In certain cases, there is need for a distributed network administration. In this case, there is an overall network administrator (admin) while the individual basic networks are administered locally. In the campus network example, each hostel network can have its local admin who is able to manage addition of new nodes or removal of existing nodes. Each network can have its network policies and controls different from other networks.

3. Where There Is Need to Increase Reliability
Reliability is the ability of the network to deliver communication to the target recipient. In a hybrid network, this is achieved due to the existence of alternative paths to a target recipient. Isolation of the basic networks also provide a simple way of finding any source of failures.

For example, the campus network provided can have a bidirectional ring topology as the main network topology, while the basic networks are star topologies. In such a hybrid network topology, if there is a failure in one of the nodes of the main topology, the basic topologies can be able to communicate with each other except for the one that is directly connected to the failed node. If the failure is on a section of the cable joining the ring nodes, there will be normal network communication as the traffic of adjacent nodes can be rerouted to pass through the other cable connections of the ring topology.

Let's take a couple moments to review what we've learned about hybrid network typologies, their types, and their applications in the real world. A hybrid network topologyis an interconnection of two or more basic network topologies, each of which contains its own nodes. The resulting topology will exhibit characteristics of all the constituent topologies, thereby limiting the inherent weaknesses of each topology.

Examples of hybrid network topologies include the following:


We also looked a hierarchical network topology, which is structured in different levels as a hierarchical tree. The choice to implement any of these hybrid topologies is largely determined by the organizational needs.