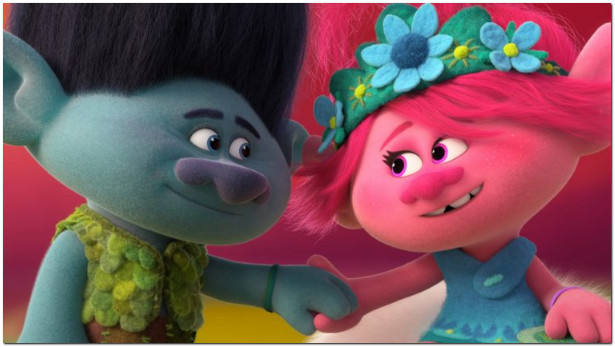 Poppy and Branch discover that they are but one of six different Troll tribes scattered over six different lands devoted to six different kinds of music: Funk, Country, Techno, Classical, Pop and Rock. Their world is about to get a lot bigger and a whole lot louder. A member of hard-rock royalty, Queen Barb, aided by her father King Thrash, wants to destroy all other kinds of music to let rock reign supreme. With the fate of the world at stake, Poppy and Branch, along with their friends, set out to visit all the other lands to unify the Trolls in harmony against Barb, who's looking to upstage them all.

The film opens on a celebration of the Techno Trolls, which is crashed by the Hard Rock Trolls, led by Queen Barb. After Barb destroys his DJ station with her guitar's power, King Trollex is forced to surrender the string that powers Techno music.

Poppy, still becoming adjusted to her new leadership as queen, receives a message from Barb that invites all Trolls to a party to unite their music. Her father reveals that there are different kinds of Trolls scattered through their land, each represented by a different style of music that is powered by a magical string kept by the leader of each tribe. Having split into their different forms of music following discord and disagreement over which was the best. Poppy wants to help Barb unite the different forms of music, but both her father and Branch warn her not to trust Barb's intentions and to accept that the other Trolls are different. Poppy does not listen, and sends a cheerful reply to Barb via Debbie, Barb's pet bat.

Meanwhile, Barb gloats over her victory of snatching the Techno string, revealing her plan to string an enchanted guitar with all six strings, and play a power cord strong enough to destroy all other music, replacing it with rock.

Wanting to prove herself as a good queen, Poppy travels via air balloon to recruit the other groups of Trolls, Branch joining her in an attempt to express his feelings towards her. Biggie accidentally stows aboard the balloon, and joins them. Meanwhile, Cooper, who feels like the black sheep among the Pop trolls, goes on a journey himself to find Trolls who look like him.

The balloon ends up in the land of Classical Trolls, which, to Poppy's horror, has been decimated by Barb's armada, who captured all the citizens. A single small flute named Pennywhistle tells Poppy the truth about what happened, and Poppy decides to now unite the other Trolls to stop Barb. Branch and Biggie both urge her to return home to protect the Pop string, but Poppy reveals it hidden in her hair. They then travel to the Country Trolls' land, but after introducing themselves with a loud medley of pop songs, are jailed by an offended Delta Dawn. A Country Troll named Hickory, who claims he is moved by Poppy's motives, breaks them out, leading to a chase to a ravine, where the group falls into a river. Branch does not trust Hickory, even when the Troll builds a raft to take the group downstream. The conversation is interrupted by Chaz, a Smooth Jazz Troll who was hired as a bounty hunter to catch Poppy for Barb, who was incredibly offended by Poppy's reply letter. Hickory incapacitates Chaz, but Biggie, disillusioned by Poppy's poor leadership, decides to return home. Shortly after, the group is abducted by a space ship wielding magical soap bubbles.

Inside the spaceship, the group meets the Funk Trolls, and meets up with Cooper, who is revealed to have been a long lost identical twin prince of Funk all along. Cooper tells Poppy he finds comfort in identifying with both Pop and Funk, and his parents, King Quincy and Queen Essence, reveal to Poppy that long ago the original Pop Trolls had attempted to steal the strings and remix the other five music styles into Pop, forcing the other Trolls to each take one string and divide their tribes to save their music. Quincy explains to Poppy that differences are not bad, and trying to make all Trolls the same does not help the problem.

After the Rock Trolls hi-jack the Funk Trolls' ship, Cooper ejects the group in bubbles, accidentally separating Hickory from the two. Branch and Poppy fight when Poppy refuses to return home to their friends, and Branch admonishes her insisting she cannot be a good queen if she is a poor listener, and the two go their separate ways, heartbroken. Branch is soon captured by both K-Pop and Reggaeton bounty hunters. However, he eventually convinces them to so stop capturing and fighting and save Poppy and all music.

Poppy reunites with Hickory, showing him the Pop string. Hickory tries to urge her to return home, but suddenly is revealed to have been a Yodel Troll all along. He and another Yodel Troll, Dickory, had been hired to capture her for Barb, but Hickory had a change of heart. Before she can escape, Poppy is then captured personally by Barb, who takes possession of the sixth and final string.

Biggie returns home and seeing it in shambles, feels remorse over abandoning Poppy. He gathers together their remaining friends to go rescue her and Branch, entering the land of the Rock Trolls.

Barb has Poppy imprisoned over a large concert stage where all the captured Trolls are the audience, and admits she empathizes with Poppy's attempts to be a good queen, as she is trying to make rock supreme to prove her own leadership. Barb uses her enchanted guitar during the concert to turn Branch, and the leaders of the other lands into rock zombies. Poppy seemingly is transformed into a rock zombie when she falls onto the stage, but upon grabbing Barb's guitar, it is revealed to have been wearing gumdrop earplugs. She admonishes Barb for being a poor queen by not taking time to listen to her people, and smashes the guitar. While it snaps the possessed trolls out of their rock zombie state, it destroys the strings, ending music, and causing all the trolls to lose their colors, much to Barb's anguish.

Cooper hears his heartbeat over a microphone, and creates a rhythmic beat with it, other trolls joining in with clapping, stomping, and other forms of sound making, reviving the power of their music, and Poppy encourages everyone to sing together as their colors are restored. Realizing how important other forms of music are, and encouraged by her father, Barb joins in, regaining her colors, and eagerly accepts Poppy's offer of friendship.

Branch is finally able to profess his love to Poppy who reciprocates his feelings, and everyone performs together, all Trolls finally reunited while celebrating their differences.

In a mid-credits scene, Bridget and King Gristle arrive to the Pop Troll village, unaware of the events of the film, and worried they have missed the party.

Also Known As (AKA)

How to Watch The Trolls World Tour Movie